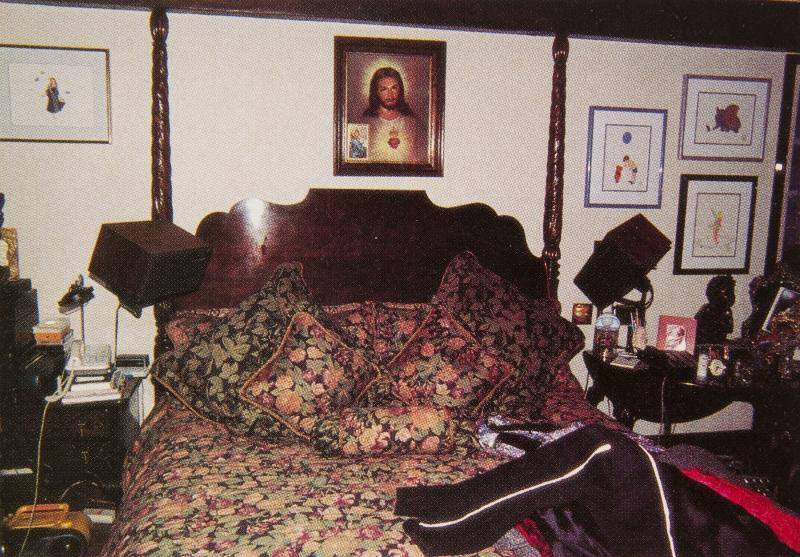 I still remember my first visit to Neverland. I mean, it would be hard to forget. But this was before Neverland was really Neverland – it was just Michael’s new ranch. He had asked me to install a music system in his bedroom – specifically on either side of his bed. It was soon after he bought Sycamore Valley Ranch, and he was just starting to settle in and plan what it could be like over time.

So I drove up to the ranch (he wasn’t there my first visit), and I was escorted into his bedroom. I quickly took some measurements and came up with some ideas… but maybe I lingered a bit longer than was really needed. I mean… it’s his bedroom for crying out loud! That’s pretty cool no matter how you slice it.

It was sort of decorated with movie memorabilia, toys, the gold and red throne (a gift, I assume?), and the classic MJ array of shopping bags and overstuffed Fed Ex and manila envelopes. Everywhere. This was how his office looked at the studio, and how Havenhurst looked, so it was clear that this was his home.

I ordered a pair of Westlake BBSM-4 speakers for his bedroom, and a nice amplifier. We not only recorded at Westlake Studios, but they also manufacture a line of speakers that we (and many professionals) used for recording. They build huge speakers that cost more than a small house, and they also sell smaller versions that sound amazing in a more traditional size. Michael was used to the sound of Westlake speakers, so it only made sense to mount a small pair of them in his bedroom for him to listen to mixes that Bruce was working on.

(I have another story about a pair of Westlake speakers I installed for Michael at Trump Tower in New York, but I’ll save that for now.)

I decided to mount them on arms that would rest above his bedside tables, and he could swing them in, so they would be floating on either side of his head, like a giant set of headphones. I thought it was a cool idea, and I dove into the project the following week. It only took a few hours to get them installed, so I kicked my shoes off and climbed onto his bed, and pulled the speakers on either side of my head for a test drive. They sounded amazing, and I was pretty proud of myself for making the whole thing come together so smoothly. Then Michael came in and listened to them, and he was so excited! We played a few mixes from the studio, and talked about new ideas for the ranch – and the rest of his enormous house.

Over the next many years I spent a lot of time at the ranch, in the house, even in the bedroom. Soon he wanted even bigger speakers in his master bathroom. I knew he loved to feel the music, and when I had it right, he would always laugh and yell, “Hurt me Brad… hurt me!”

Years rolled by, more projects, more albums, more mixes, more laughter. Then one day it was as if the music stopped. Michael was gone, and Neverland would forever be empty without him. I remember watching news reports of strangers and the press touring the house. It seemed so empty, looking at the bare floors and vacant rooms on TV. I remember one reporter walking into the bedroom, and trying to describe something he clearly had never seen. Then I saw the holes in the wall, where I had mounted my swing arm brackets for the speakers. The missing speakers. They were gone now, like everything else.

I didn’t really notice anything else, just the missing speakers. I knew he loved how they sounded, and I imagined him cranking them up and eating popcorn (“corn”). In a way they symbolized where he came from, and what drove him: Music. After seeing the holes in the walls where my speakers used to hang, I generally avoided all photos and videos of inside the house. It wasn’t the same. The missing speakers represented, at least to me, a great loss.

It’s just one of those days.

Tickets are now on sale for our seminars in Japan (January) and New York (February).